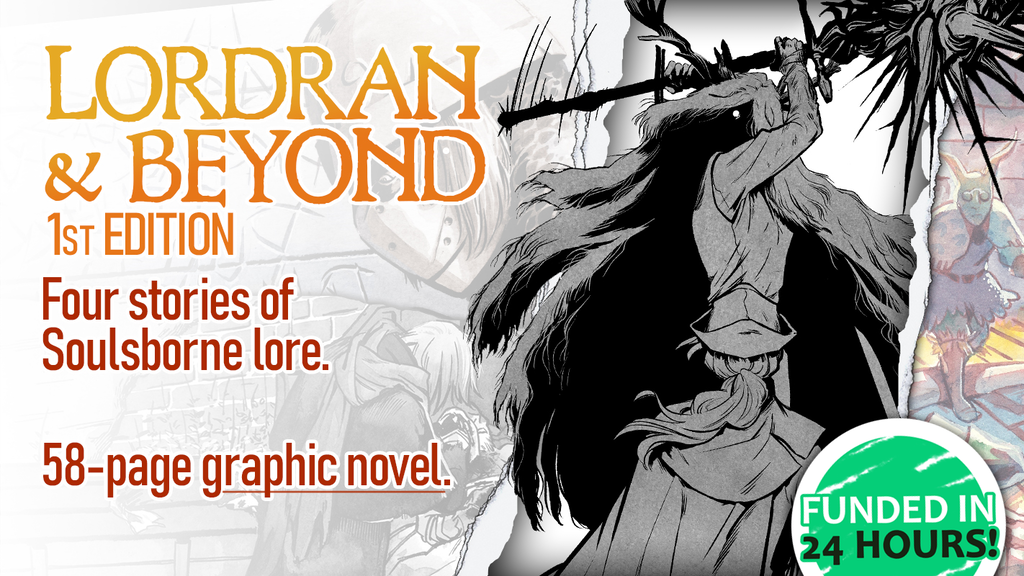 The Soulsborne graphic novel that explores the depths of horror and humanity. Lordran & Beyond 1st Edition is now available for pre-order. This four story collection combines 58 pages of Soulsy comics drawn by Veitstanz, plus 20 pages of extras including character profiles, trivia, and an art gallery!

Latest Updates from Our Project:

Here's a look at the final designs of each cover for L&B 1st Edition! I settled on a more fitting font for the title compared to the example mock up shown off during the start of the campaign. I hope everyone likes what they see! Also, be sure to decide on your favorite since backers getting a physical book will choose which cover they prefer!

Hey all! Just wanted to offer a quick status update to start off the work week; Veit has finished up the watercolor Djura variant cover, and the presentation tweaking/editing on the pages is nearly finished as well. Once the pledges are done processing/collecting later this week, things will start to move a LOT more quickly! Backers getting signatures dedications or custom artwork should expect surveys sent by this weekend. Also, early next week a lot of pledge and funding tier specific rewards will be ordered, including the poster prints, sticker sheets, and enamel pins!

While pledges are processing and I'm doing some tweaks and color tuning for the L&B 1st Edition pages, I wanted to give a shout out to some other on-going and recent graphic novel/comic Kickstarter projects that caught my eye!

Tavern of Dreams is a beautifully illustrated hardcover novel that is often described as "Night at the Museum" meets "Lord of the Rings". This novel takes you on a journey as you delve deep into the mysteries that haunt the quaint and friendly Grumpy Lion Tavern.

The story takes place at the Grumpy Lion Tavern and is the second book in the Luminous Ages series, following on after the events of the first graphic novel in the Luminous Ages series. However, while we do catch up with the characters from the first book, it can also be read as a stand alone book in the style of Terry Pratchett's Discworld. The focus is on the marvelous tavern they stay in and the mystery that is haunting it.

This makes it a good stand alone story for people looking for a bit of mystery in their fantasy, because this tavern is no ordinary tavern. Magical things happen at night when everyone sleeps hence the name "Tavern of Dreams".

THE JUMP is a kick-you-in-the tenth paranoid thriller set in the world of astral projection. It’s INCEPTION meets THE BOURNE IDENTITY if it were dripping with macabre and directed by David Fincher.

It’s brought you by the same twisted team that produced Action Lab: Danger Zone's much-lauded superhero noir BANJAX. It made over a dozen critics ten best lists in 2019 and was nominated for FOUR Mike Wieringo Comic Book Industry Awards including BEST SERIES (alongside BITTER ROOT and SOMETHING’S KILLING THE CHILDREN).

This campaign has actually already ended, but I've worked with Ver personally and they're a fantastic artist who's included in this collection. This compilation is still available for pre-order even though the Kickstarter has ended, so definitely check it out!

A cursed suit of armour and the knight who dons it; a lovestruck student desperate to impress the professor's daughter; a young girl tasked with caring for a terrible beast; a witch working to turn the moon into a new home for humanity...

Four fantastical stories from four of Scotland's most exciting creators, published by brand new comics publisher Quindrie Press! Each book is a compact 127x191mm - standard manga size - and is available to buy separately or as a bundle at a discount.

Hello everyone! It's the week after the campaign ended, and I wanted to share this handy graphic, designed by Chris Blanco, that backers can have a look at to keep up on fulfillment progress!

While the presentation is intended to be clearly understood and apparent as possible at a quick glance, there are a few things to note. The most important status is, naturally, "Finished!" Steps with this status are, well, done! Steps marked as "Almost done" are either in the very final stages of wrapping up, or if they're a physical reward, "Almost done" means the designs and artistic work is finished but they simply need to be ordered. For example, the sticker sheets and enamel pins are already fully designed, but won't be marked "Finished!" until the orders for them are safely arrived and verified.

I don't intend to update this on an annoyingly frequent basis for every granular bit of progress, but backers can expect to see updates about fulfillment at least once or twice a week, and of course as major milestones are hit.

Later this week, everyone will also be able to see the fully finished and scanned version of the new watercolor cover featuring Djura! I hope you all had a good weekend, and thanks for checking out this update!